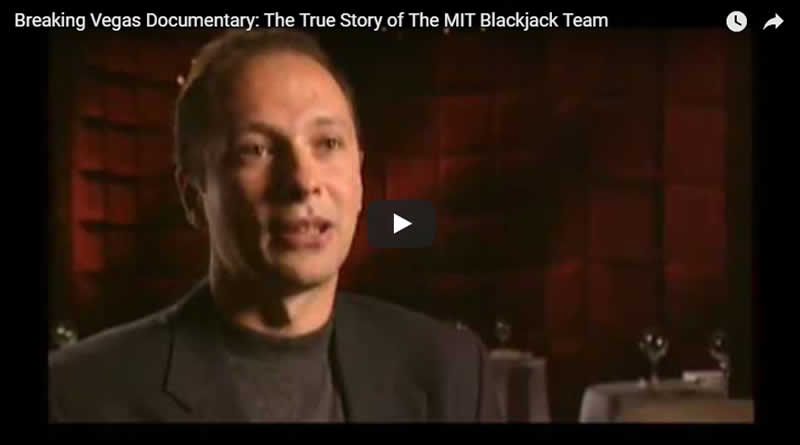 “The first year I played, we returned 154 percent to our investors. That’s after paying off expenses. You try and do that on Wall Street.” – Jeff Ma, member of the MIT Blackjack Team.

How did a bunch of college kids from the Massachusetts Institute of Technology (MIT) and Harvard University become the most feared blackjack team on earth in the 1980’s and ’90’s? Individual players on that blackjack card counting squad routinely made $100,000 to $180,000 per session in profits, and Las Vegas treated them like royalty. That is, until they found out these fresh faced blackjack bandits were using an intricate card counting system and confederates to uncover the most favorable circumstances for a big bet. While blackjack card counting itself by using your brain is not illegal, the MIT team which has been the subject of films like the documentary “Breaking Vegas” and the more recent Hollywood production “21” sometimes went above and beyond simply using great math skills, and paid the price. But not until after winning tens of millions of dollars at blackjack and bringing Vegas to its knees.

And if you think the claims above made by Jeff Ma of 154% returns are a little outlandish, they actually started off much better than that. Bill Kaplan is a 1980 Harvard MBA graduate who had run a very successful blackjack team out of Las Vegas in the late 1970’s, and in 1977 used a blackjack card counting strategy to generate a 35X rate of return over a nine-month period (that’s turning $1,000 into $36,000 in 9 months). In 1980, Kaplan headed up a team of MIT and Harvard students that hit Las Vegas using formal management procedures and approaching a blackjack card counting and betting system as a business. On August 1, 1980 that original MIT team began with a stake of $89,000, with player names like Massar, Jonathan, Goose, and Big Dave doubling the original stakes in less than 10 weeks. An investor prospectus had estimated profits of $170 per hour, and actual play delivered realized profits of $162.50 per hour. Mostly undergraduates, the MIT team, as it came to be known, earned across-the-board an average of over $80 an hour while investors enjoyed annualized profits of 250%.

All this while Las Vegas showered the young players with free rooms, lavish suites and other Sin City comps. Andy Bloch, now a professional poker player that holds two electrical engineering degrees from MIT and a Juris Doctorate from Harvard Law School, was one of the MIT blackjack members. He has claimed “tens of millions” of dollars won by his fellow teammates and subsequent team members, and it is hard to argue with that estimate. And all those millions started to draw attention. Henry Houh, at the time a grad student at MIT, noticed his office-mate lugging around thousands of dollars of casino chips at work. Saddled with massive debt, he eagerly joined the card counting team, stating, “It was great fun.” With plenty of “crazy stories” of partying and staying in $1,000 a night suites complements of Las Vegas casinos, Houh also said that the MIT blackjack team was the reason it took him 13 years to finish school.

But these brilliant blackjack brains did not simply decide to get together and then hit Las Vegas. The mysterious Mister M and Kaplan put potential blackjack team candidates through grueling training sessions. A fully trained card counter then had to undergo a “trial by fire” final exam by playing through 8 six-deck shoes without mistakes, all while being lambasted with loud noises, music and other distractions typical to the average casino. Players learned to stagger their betting patterns as to disguise the fact that they were counting cards and waiting for the perfect scenario. They would then make a massive bet when they had an extreme advantage, and while losses naturally occurred, the profits were far greater. Advanced techniques like ace tracking and shuffle tracking were also employed, but John Chang, an MIT undergraduate that joined the team in late 1980, stated that the most consistent profits came from straight blackjack card counting.

Playing throughout the ’80s, and growing to as many as 35 players in 1984, a full 22 different partnerships composed MIT blackjack teams from 1979 through 1989. A total of 70 people played at one time or another in some capacity, either as card counters, “Big Players”, or in other supporting roles. Many times a player would count cards at a blackjack table while placing small bets without wavering his play. When the table was right for the picking, that player would signal someone sitting at a nearby bar or appearing to simply be watching, and that Big Player would swoop into the table for a single large bet, collect and leave. Incredibly enough, every single MIT blackjack team was successful during that tenure, paying in some cases over 300% per year to investors. In 1992 and ’93, MIT blackjack team members Bill Kaplan, J.P. Massar and John Chang formed Strategic Investments as a limited partnership to run the blackjack card counting enterprise. Through the early and mid-90s, the MIT team grew to nearly 80 players, with 30 players playing simultaneously at different casinos around the world. While blackjack teams consistently come and go, the MIT blackjack card counting team of the 1980s and ’90s will always live on in memory as one of the most brash and successful blackjack teams of all-time.