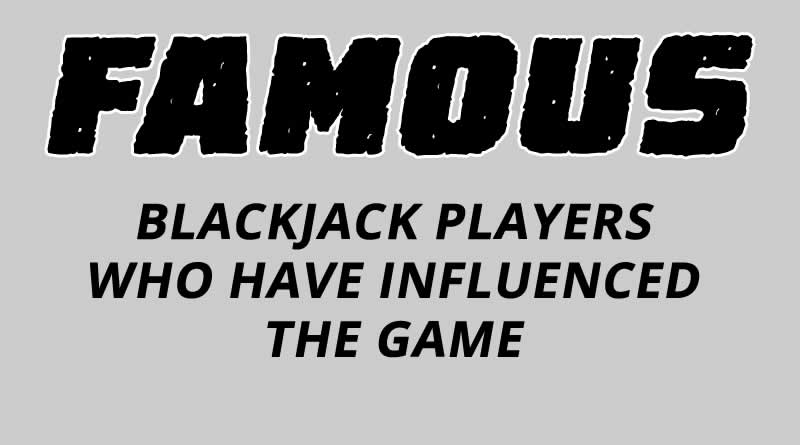 As professional blackjack players ourselves, we respect the greats in the industry, and what they have done to impact and inspire players around the world. It was our desire to include a place of honor for them on our site to express our gratitude for all that they have contributed. Our hall of fame section includes great players and thinkers in the game, those who were responsible for the building blocks of blackjack strategy, and those who meticulously and successfully put effective strategies and methodologies to work, achieving the types of wins that all players dream of.

From famous multi-million dollar winners like Don Johnson to great thinkers like Lawrence Revere, we’ve prepared some short but intriguing bios of the greatest contributors to the blackjack gambling industry. While there are many more members of the Blackjack Hall of Fame that those who appear here, we restricted our list to those who had the most significant impact on us personally as players and industry professionals. These are not the only individuals worthy of mention, but they each have a personal value to our own team.

Along with being a professional blackjack player, Mr. Revere was also a casino pit boss, which certainly gave him a unique perspective and insight into the inner workings of the casinos, which ultimately provided him with valuable information on how to stay under the radar and avoid being detected as a strategic and/or strategic player by the casino officials. His contributions to the field of blackjack strategy are valued greatly by players, and he is regarded as one of the greats throughout the industry. Lawrence Revere is a member of the official Blackjack Hall of Fame since 2005.

Made famous from the movie “21”, this team of players, which included students and alumni from MIT and Harvard, as well as some other top colleges, used card counting strategies and mathematical principals to win at blackjack in casinos for over two decades. The team went through many changes, with some of them failing and new teams being formed from time to time.

The casinos eventually caught on the some of the team members were identified and banned from the casinos, which led to the disbanding of the team in 1993. However, in 1994 several new teams emerged and were very successful, winning in excess of a million dollars each. While the movie “21” does contain some fictional content, as does the book it was based on, it is an intriguing look at the impact of this team played card counting concept.

While the team itself is not a member of the official Hall of Fame, some of the founders and managers are, including Al Francesco and John Chang. We have an entire section dedicated to the MIT Blackjack Team if your interested in learning more about them.

The Four Horsemen of Aberdeen

These guys are some of our biggest heroes because of what they accomplished despite the limited resources at their disposal. The name was given to four US Army servicemen who may have made the single largest contribution to the blackjack industry of all time. Their names were Roger Baldwin, Wilbert Cantey, Herbert Maisel, and James McDermott.

They are responsible for developing the very first complete and effective basic blackjack strategy that provided direction on exactly how a player should respond in every situation. They achieved this in the 1950s before we had computers at our beck and call to figure things out for us. They used hand desk calculators to study and figure out the math that drives the game of blackjack.

Their extensive research and effort set the groundwork for those who came later and developed more advanced or sophisticated strategies, all of which use the basic strategy developed by the Four Horsemen as their cornerstone. These brilliant gentlemen were inducted into the Hall of Fame in 2008.

This famous blackjack player was inducted into the Blackjack Hall of Fame in 2002. He is credited with making the concept of team play in blackjack popular. In fact, he became so good at administering this concept that he was banned from casinos all around the world. He was able to disguise himself well enough to bypass these bans and maintain access to the casino blackjack tables.

He is also well known for winning a lawsuit against Atlantic City casinos in which the courts sided with him and declared that NJ casinos cannot ban players simply for counting cards. In addition, he is known for authoring his bestselling book entitled ‘Mastering PAC-MAN, which provided insight into successfully playing this arcade game, which was very popular at the time.

Also inducted in 2002, Standord Wong is actually the pen name of John Ferguson, he is responsible for developing multiple playing strategies for gambling, including the famous ‘wonging’ technique, which is a specific card counting approach that watches a game from the beginning of the shoe and then joining in the game if the count turns advantageous in the player’s favor.

This strategy is the reason that some casinos do not allow mid-shoe entry into the game. He is a famous author of gambling books on various topics, including online blackjack, craps, and sports betting, among others. His best-known book is ‘Professional Blackjack’, published originally in 1975 and still in print. He also developed a computer program called ‘Blackjack Analyzer’ which was one of the very first pieces of software that were available commercially for analyzing blackjack odds.

It was initially created for personal use. He began playing blackjack in 1964 while he was a teacher at San Francisco State Univ. His teaching career was not fulfilling for him, and he made an arrangement with the University to be paid only $1 for his final term of teaching in order to be exempted from faculty meetings and have the time to pursue his career in gambling.

Inventor of the first wearable computer, and one of the first developers of modern applications of probability theory, Thorp wrote one of the first keynote books on blackjack. His book was called ‘Beat the Dealer’ and was published in 1962. He was the first to publish information that demonstrated that card counting could be used to give the advantage to the player and overcome the house advantage. He used computer technology of the time to perfect his strategies, and then put his theories into action.

He was so spot on and earned so much profit initially that he was quickly banned from several Las Vegas casinos. He gained instant notoriety, which is what drove him to write his book, which was included in the New York Times bestseller list. Later strategies that he developed included the wearable computer that he invented and some even applied to the stock market, where he also became very successful concerning hedge funds. Mr. Thorp was inducted into the Hall of Fame in 2002.

Grosjean is known as a gambling expert, professional blackjack player, and author. He is best known for his book ‘Beyond Counting: Exploiting Casino Games from Blackjack to Video Poker’. His book is based on mathematical solutions for various forms of strategies used in casino gameplay. What he may be most celebrated for though are his legal victories against the casino industry and its associates.

He effectively asserted his rights as a player against these parties and is considered something of a hero among players. He won a suit against the Imperial Palace that resulted in a $599,999 jury verdict in his favor. The basis for the lawsuit was illegal detention. He also won a suit in which the verdicts included damages against Caesar’s Palace and Griffin Investigations.

These two parties paired up to maintain information on card counters and winning gamblers. This litigation resulted in the bankruptcy of the investigation service, as well as the ongoing legal action against four agents of the Nevada Gaming Control Board. Grosjean is still a professional blackjack player and participates in events all around the world. He was a participant in the CBS 10-week series Ultimate Blackjack Tour. He was inducted into the Blackjack Hall of Fame in 2006.

We felt justified to include one of the most recent famous wins in which Don Johnson, a high rolling blackjack player won $15 million in blackjack in the spring of 2011. His winnings were acquired from three casinos: The Tropicana, The Borgata, and Caesar’s, all located in Atlantic City, New Jersey. His largest win, $6 million in one night, occurred at the Tropicana Casino.

After carefully scrutinizing his gameplay, it was determined that he did not cheat in any way, including counting cards (casinos consider this cheating), and that his good decisions during gameplay combined with extremely good luck resulted in his house-breaking winning streak.

So how did he do it? His complete understanding of the game inside and out, and extensive understanding of the odds, rules, and house edge, combined with mathematical statistics all fuel the knowledge base that makes Mr. Johnson who he is as a player. He is said by some casino CEO’s to ‘play perfectly’ on each and every hand, knowing precisely what decision to make in every single hand.

His $6 million dollar win at the Tropicana caused them to have a record low month and suffer financially. As a result, the residing CEO at the time as given the boot for authorizing Mr. Johnson’s $100K per hand betting limit. Mr. Johnson has not yet been inducted into the official Blackjack Hall of Fame, but we won’t be surprised to see him there in the future. Read Full Story On This 15 Million Score Here

Check out our article on Famous Athletes That Have Lose Millions Playing Blackjack.